Yes, it is that time again! After five months of development and testing, we at Brandt OSS are proud to announce the latest stable release, Mailster version 1.1!

The full list of changes can be read in the changelog, for the most important changes read on.

Version 1.1 makes Mailster fully compatible with Joomla 3.4 while it does not break compatibility with Joomla 1.5, 2.5 and 3.x.
Only Joomla 1.6 and 1.7 are not supported anymore.

We have decided that Mailster 1.1 is the last release for Joomla 1.5 as over 90% of our customer base is on either Joomla 2.5 or on 3.x.
Therefore we will remove the 1.5-specific code in the next release.

In some situations Mailster receives emails that are automatically generated (e.g. out-of-office notifications, bounce email notifications) and which therefore are not considered relevant and thus are not forwarded to the mailing list.

While most of these emails contain attributes that make them identifiable as such automatic generated emails, some email server generating that emails fail to include such attributes.
In that situation Mailster is in trouble as there are no indications that the emails should better not get forwarded and are regarded as "real messages". This might lead to situations where the forwarded email will produce the next notification and such a never-ending email loop is produced.

To cope with this difficult situation the new release introduces a configuration setting where you can put in the source addresses of such unwanted automatic emails to block those senders. 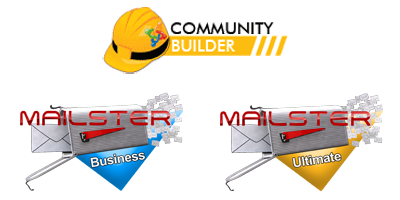 Both the Business edition and the Ultimate edition of Mailster feature a CB Bridge Plugin for the well-known social extension Community Builder.

With this release Mailster integrates with the brand new Community Builder version 2.0.

Learn more about the synchronization capabilities on the CB Bridge Plugin documentation.

In some cases you may want to block the access to the frontend email archive that is included in the Business & Ultimate edition.
For that there is a new mailing list specific setting to forbid the access to the list's emails.

In the previous release a glitch was introduced where the recipient list was not built correctly from Joomla user group members. This is now working as expected, again.

For the other bug fixes and other improvements read the changelog of version 1.1.

We use cookies on our website. Some of them are essential for the operation of the site, while others help us to improve this site and the user experience (tracking cookies). You can decide for yourself whether you want to allow cookies or not. Please note that if you reject them, you may not be able to use all the functionalities of the site.